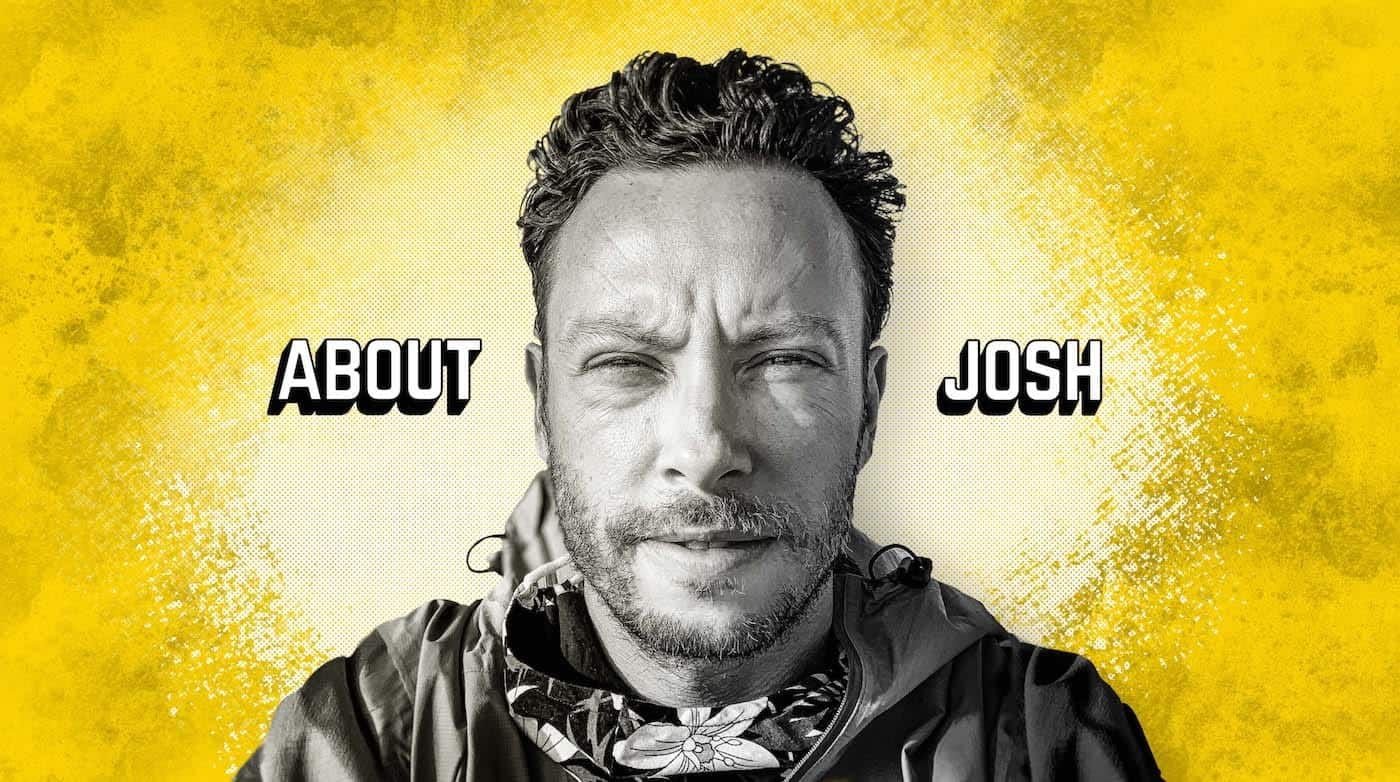 Howdy. My name is Josh Koerpel.

(sorry for the extreme close up.)

I have been a digital nomad for over 15 years.

…and my journey started with the photograph you see below. 👇

I took this photo.

We were in the middle of the Atlantic Ocean on a tall ship called the “Pride of Baltimore II.” The swells and waves reached well over 30 ft above our heads and we clipped our harnesses to the ship so we wouldn’t get washed overboard.

See — there are moments in life when you really feel alive.

This photo was one of them.

After this, I knew an office job just wasn’t going to cut it for me.

I knew I wanted more.

I’m Not Your Typical Digital Nomad.

I didn’t book a flight to Bali and rent a villa, or trounce around ex-pat locations like Spain or Columbia working comfortably from co-living spaces.

No. I’m proud of the fact that I was truly nomadic and extremely self sufficient.

I really tried to immerse myself in a culture.

And, in addition, built 3 mobile apps, 2 software-as-a-service products, and ran the marketing for a $4MM health and nutrition ecommerce company. All from the road!

What Can You Learn From This Blog?

I understand what it feels like to not feel happy with who you’ve become, or the fear of feeling “too old” to start something new.

Or to not feel like you fit into a place and want a do-over.

If you’ve ever wanted to ‘break away’ and start over, you’ll need someone you can count on to tell you the real deal.

I’ve been there. And I absolutely hate the ‘fluff’ around digital nomading these days.

So if there’s one thing you’ll definitely learn from me, it’s how to take more action in your life.

Fun Facts about me:

I didn’t get along with other kids growing up, was bullied, made fun of, got into fights, and thought the world was a cruel place.

I’m sure a lot of you could relate to that.

But in order to be tough? You’ve got to get hurt.

All of that pain builds personality. It builds grit. And makes you an interesting person.

In fact, my friends have unofficially dubbed me as “The Worlds Most Interesting Man.”

#1: I was a weird kid and now speak fluent Spanish. In fact, I have a degree in it.

At 16, I learned to speak Spanish by living with a host family in South America for a year. They throw you right into the school system and basically say “good luck, amigo!”

Because of this trip, along with studying at the University of Valencia in Spain, I graduated from Denison University with a BA in Spanish.

But…by FAR the biggest mental challenge you face in this situation is not feeling understood. An inability to communicate with anyone. That’s a tough situation for anyone to be in.

You learn to be patient. To chip away at it. And it builds up your capacity to think creatively.

#2: I have a unique appreciation for life — and french.

In 2005, I sailed across the Atlantic on a 160 ft. wooded ship, leading to 3 months shipwrecked in France.

Look before you start judging, know this. We took INSANELY good care of this ship.  We were trained professionals and had licenses of our own.  We had lifetimes of combined rigging experience. We had one of the most well-respected tall ship captains alive today.

Yet despite all of that, crazy stuff still happens. Like this…

Don’t worry. No one was hurt (amazingly). But I did get to live in France for awhile, learn the language and research the local women. (for science, of course)

Here is the lesson in all of this. No matter how hard you prepare, things are still going to go wrong.

#3: I am convinced that traveling by motorcycle is the ultimate way to see the world

When I was 26, I spent 2 months motorcycling in the Himalayas of North India…and rode all the way to Tibet.

The lessons you learn on the road are numerous…but one in particular is very relevant to anything in life.

When faced with the unknown, just act. You’ll figure it out along the way.

Or, as one of my sailing heroes Bernard Moitessier said very concisely:

Couldn’t have said it better myself.